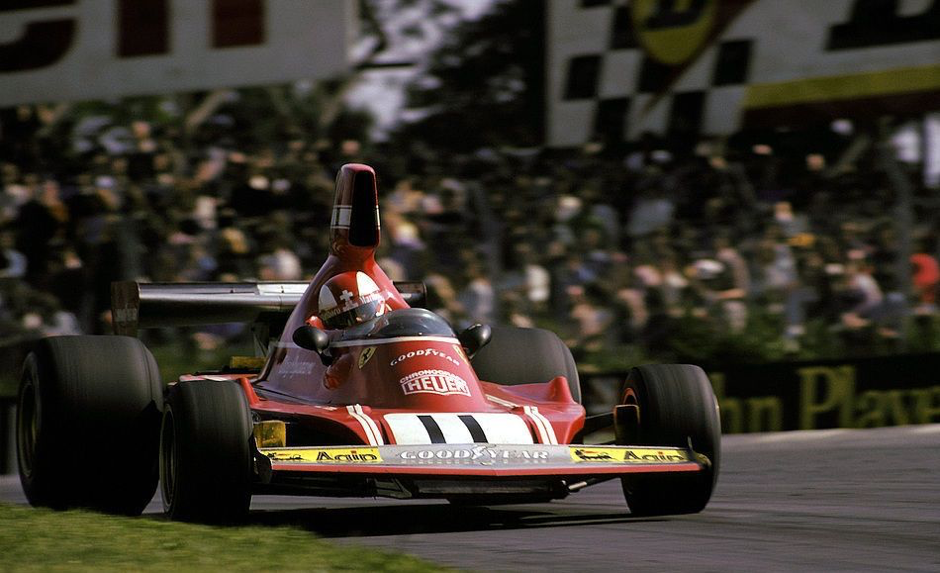 [Image: Clay Regazzoni pushing his Ferrari 312 B3 through Clearways at Brands Hatch in 1974]

Racing Pride’s Chris Stevens recently sat down to chat with Matt about all things Formula 1 and LGBTQ+ motorsport issues.

In 2017 McLaren published a series called ‘My F1 First’ asking those that worked for them at the time to describe the first time they got hooked by F1. One of those was one Matt Bishop, F1 LGBTQ+ pioneer and current Director of Communications for W Series.

Let’s start with your own career, tell us about your arrival into Formula One, the reaction you got and how it developed.

I arrived in Formula 1 as a journalist in the mid-’90s and I very clearly felt like ‘the only gay in the village’, having been a journalist for some time in road car journalism where I had also been out. Weirdly, though, I think I was advantaged by something that shouldn’t really have been an advantage as in truth I’d describe myself as a ‘straight-acting gay man’. Whilst that shouldn’t make any difference at all I think it did in terms of reducing the extent to which my arrival disconcerted the more conservative-minded members of the Formula 1 fraternity. It was probably a relief to them that I wasn’t what they might have thought of as camp.

I didn’t hide it but I didn’t walk straight up to Michael Schumacher and say ‘Hello, good morning Michael, I’m gay’ either. But as people got to know me, they asked me if I was married and of course I wasn’t.

How did you handle that situation?

Instead of just saying no, I used to say ‘No, actually I’m gay’ because I used to find that a simpler way of getting through the next 10 minutes which would otherwise have been ‘Oh really, not married? Girlfriend or…?’ and all that business. I didn’t want to have all that so I would usually just answer, ‘No, I’m gay.’ Do I know if there was any sniggering behind my back on that subject? I don’t know. Some people have said to me that there was but I never actually encountered anything like that.

One thing I did encounter though were Formula 1 drivers who clearly hadn’t really met any gay people before and therefore had to go on a bit of a learning curve because actually I was the first gay man they had ever met – other than perhaps the odd fleeting encounter with a waiter while ordering a meal. Some of them have since told me that they’re grateful to have experienced that learning curve at that stage. It was good for them, good for me and good for Formula 1.

And what about today? Thankfully you’re not the only gay in the village now.

I’m certainly not! Even though that might be helped by the fact that I’ve been in senior positions in Formula 1, and obviously now in W Series, and quite well known in my field and a bit of an old boy now as I say. I’m 56, part of the furniture, perhaps it’s all become a bit easier for me. Today any LGBTQ+ newcomer in journalism or marketing or PR who arrives in motorsport or Formula 1 I think might encounter a tiny bit of resistance but very little in my view.

What do you make of the state of representation in motorsport today?

By and large I would think that motorsport is still largely the province of white, heterosexual males. Not of course exclusively, but largely. There are a number of things positively challenging that though. There are of course some LGBTQ+ people in motorsport, but quite a few of them are hiding, even now. Those who are hiding aren’t usually people in my kind of area of work, which has always been journalism, PR, comms, marketing, that side of the business. I think in general over the past few years people in those areas of work have begun to feel able to come out and be honest about themselves, but among mechanics and engineers there’s still often a reticence or a reluctance to come out.

Some people said to me, when I was hired by McLaren, ‘Ron Dennis is only happy to hire you because you’re a comms man, but if you were a mechanic or an engineer he might not have hired you.’ That’s what was said to me at the time, but I don’t know that it’s true.

To be absolutely clear, I never encountered a single gram of homophobia from Ron, in fact he was very sweet to my husband Angel Bautista, whom I met in 2010, during the course of the time I was at McLaren. Ron was always very nice and polite to Angel, as indeed was everyone else at McLaren. So I don’t exactly know but it would seem to me that, in a nutshell, there may be an acceptance of LGBTQ+ people in Formula 1 if they’re not hands-on-the-car people. So there’s acceptance for the marketers, the PRs and the journalists, and less acceptance for the mechanics and the engineers, but that may not be a reality, that may just be an inaccurate assumption made by LGBTQ+ engineers and mechanics. Sometimes they used to come to me and say, ‘What should I do about it? I’d love to come out but I dare not.’

Do you think what W Series has done and is doing for girls and women may encourage other motorsport series to embrace LGBTQ+ issues to a greater extent?

We’ve seen all summer in the W Series races, but particularly at Brands Hatch because it was what we called the Brand Finale a lot of young girls declaring themselves as Jamie Chadwick fans, shouting Jamie’s name as she walked past, getting autographs and selfies.

I think W Series has unleashed a pent-up enthusiasm among female race fans, including very young ones, who now have someone to identify with and realise it’s not just their brothers idolising Lewis Hamilton.

So, can that be replicated for LGBTQ+? We already have Sarah Moore in W Series, who is out and proud, which is great, but I think it requires a high-profile male racing driver to come out too. There have been some, there was Danny Watts, but he came out just after he’d retired as a driver. The next step is that someone needs to come out in Formula 1, in the same way that someone needs to come out in the English Premier League. Someone needs to say, ‘Yes, I’m a gay man, and isn’t that just fine?’ I don’t personally know if any of the current Formula 1 drivers are gay but one day there will be one and I hope he – or she – comes out. We shall see.

Why do you want to help Racing Pride?

When Racing Pride contacted me, I was straightaway impressed. I already knew Oliver Warman, who is a mate of mine and was the founder of Gay Racers. He’s an ex-racing driver himself who now works as a videographer and photographer. So when Racing Pride came along I told Oli he needed to be involved in it and he’s now a trustee, which I’m very pleased to see.

When I met the Racing Pride founders I realised immediately that they were people who were intelligent and motivated, and in the right place at the right time, so I thought I would do what I could to help. I haven’t been able to do enough so far because I’ve had one of the busiest summers of my life with W Series, but I’d like to do more if there’s more time available to me in the autumn and winter.

I realised, having been in the sport for such a long time, that there were people who still felt uncomfortable about their sexuality. Quite a few times when I was at McLaren there were LGBTQ+ mechanics who came to me and said ‘I have to live a lie on the race team or in the factory.’ But if they – mechanics, engineers and perhaps drivers too – can gradually become more comfortable to come out and be who they want to be, that would be a wonderful thing. And if Racing Pride can help with that then to me that would be a truly fantastic thing.