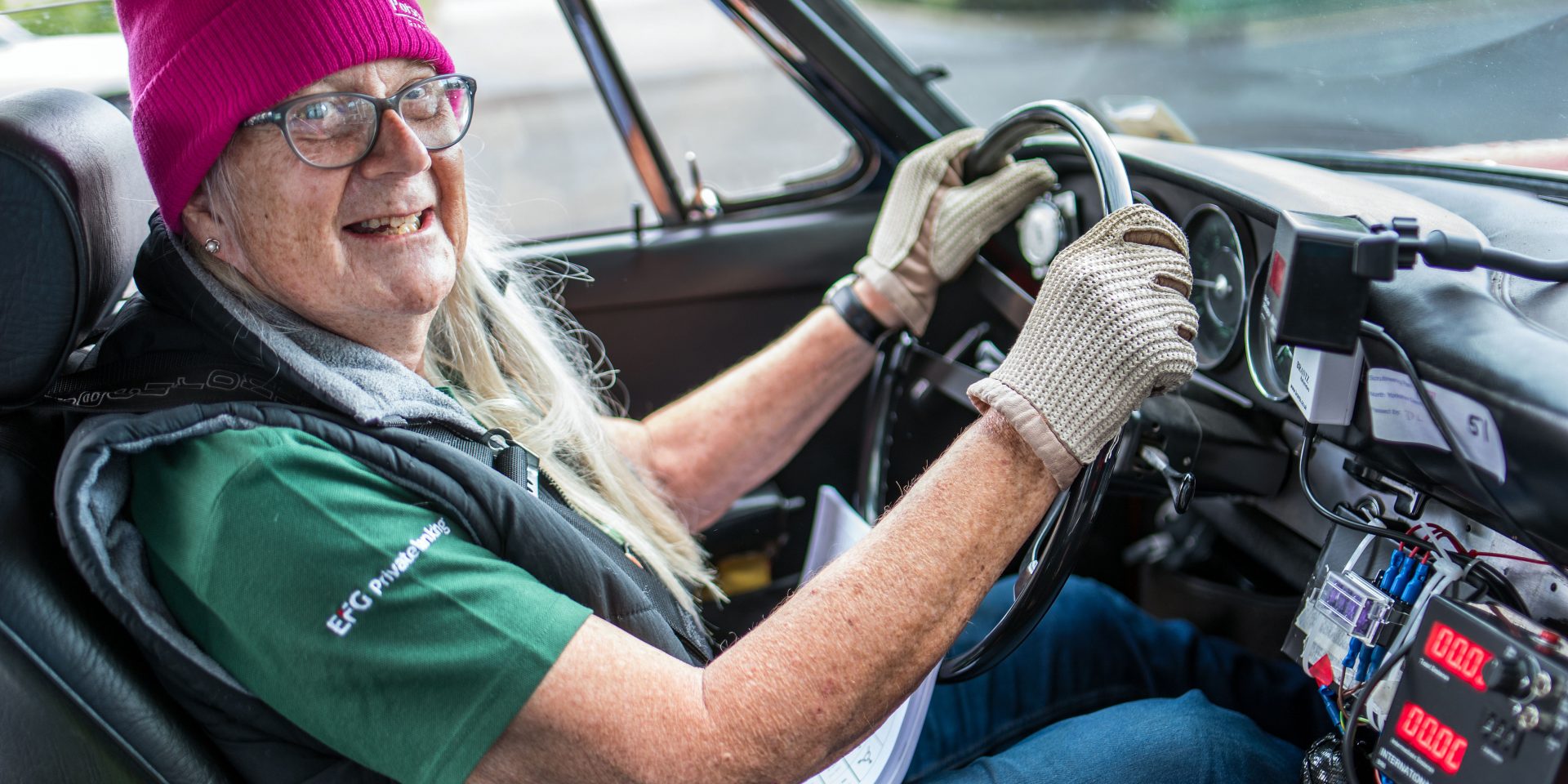 Caitlin Penny is a 17-year-old transgender sim racing driver, commentator, and aspiring motorsport journalist. Here, in the first of our series of interviews examining the stories of LGBTQ+ people in motorsport, Caitlin speaks to newly-announced Racing Pride team member Rowena Purdy, a veteran transgender competitor with a fascinating and inspirational life story, and reflects on the similarities between their personal experiences. Caitlin writes:

Rowena Purdy is a woman of many talents. She served in the RAF flying Shackleton and Vulcans for over a decade; she used to write a monthly column for Porsche Club GB’s magazine ‘Porsche Post’; she transitioned from male to female; she learnt and earned a degree in Chinese; she joined her local WI committee and somehow she had time to fit in a 50-year Motorsport Career which is still ongoing today. She started out rallying a Fiat 125 in 1969 and since then has competed in road, stage and historic rallies from club to international status. She has not only been a driver, but also a navigator, organiser, instructor, marshal, official, commentator and reporter.

Naturally I was thrilled when I was asked to interview her and I jumped at the opportunity, starting by asking her which of the many things that she has done (or still does) gives her the greatest sense of satisfaction.

“I still get great satisfaction from accepting a challenge” she replied, “whether it’s camping near the top of East Africa’s second highest mountain (12,000 feet up Mt Elgon!); being awarded my flying badge after a bit of a struggle; winning the Rothman’s Hong Kong National Rally Championship; or being awarded my RAF Colours for Motorsport. But my proudest achievement has to be going up to Oxford to read Oriental Studies with Chinese for four years, sitting nine 3-hour exams over five days and then walking down the aisle at the Sheldonian Theatre in front of my wife in order to hear the Vice Chancellor speak those words of Latin confirming my degree.”

Clearly, she is an inspirational and successful lady who many would see as a role model. However, when I asked her about this she was humble about it.

“If I were to be considered by some as a role model, I’d feel very humble as being such a person comes with a major amount of responsibility.” She adds “I’ve never really thought too much about my own role models. If pushed to think positively I would probably nominate my English master at school who managed to get me really interested in English in all its differences as well as explaining our English Literature books well enough for me to read outside the box. As far as rallying is concerned, I just followed all the greats; Moss, Mehta, Joginda Singh, Moss-Carlsson, then later Clarke and McRae. I did meet Per Eklund on an international rally once.”

When it comes to words of wisdom and advice, though, Rowena is full of them. One thing that especially stood out to me was her stance on dedication and open-mindedness. Tellingly, she reflects “I find that in life, as well as Motorsport, it matters not whether one has experience or not. If one is prepared to get out, volunteer and get involved in something one really wishes to do, experience will come. Lack of experience has never held me back! I’ll try anything once, and if it works I’ll have another go.”

Surely, these are words to live by. Furthermore, she had some extra advice for young people aiming to get into Motorsport such as myself.

“Get out there and do it. Join a club and talk to members, volunteer to marshal, even find out if a driver wants a navigator or, if you want to drive, find someone who wants to try navigating. Motorsport UK has its own anti-bullying policies covering all the usual. Gender, religion, sexual identities, etc. Everyone is welcome from the newest member to the CEO.”

In fact, that leads us on very nicely to Racing Pride and Rowena’s transition. From a young age, Rowena felt that her assigned sex did not match her gender. Unfortunately, due to her attending an all-boys boarding school she felt that she needed to suppress this at all costs, a feeling which persisted long into her career. I can tell you from personal experience (after growing up in a strongly religious family and attending a religious church and school which didn’t believe in being transgender) that suppressing yourself in this manner is highly uncomfortable. It was very refreshing for me to hear about Rowena’s experience, as she transitioned after retiring and proved that it’s never too late to express yourself.

“I now consider myself to be fully transitioned, although I am conscious of not conforming completely”, explained Rowena. “I now live fully as a woman and have no problems presenting as a woman in the local area or at social and formal occasions. A couple of years ago I accompanied my daughter to a very formal Oxford and Cambridge Universities’ dinner in Washington DC surrounded by the good and the great and was accepted as me – long dress and all! I am a committee member of my local WI and could soon become a parish councillor (again!). I wear skirts and tops more often than I do jeans, but I have yet to master high heels or make-up.”

“If you decide to transition, you don’t have to do what I did. I used to write a monthly article for Porsche Post, but when I started to transition I realized I’d have to change my name and thus there would be a new, female name at the bottom of the column. The board of directors refused to let me resign, so I ended up announcing my identity to around 12,000 Porsche Club GB members all at once!”

Interestingly, Rowena’s experience isn’t entirely unusual. Journalists like Rowena and I have all of our works archived, so many people often witness our transitions. In my five years as a commentator I have had three different names and my voice has changed dramatically; indeed, it often makes me quite self-conscious to know that anyone can go back and see or hear this. It can also make people in our situations feel ‘locked in’, as if they can’t transition for fear of how other people will react to it. In my case, I lost several close friends and have been the recipient of transphobic comments. It’s shocking how real transphobia still is. However, for every bad egg you find, you will always have several more friends who understand, or want to understand more, a positive thought which Rowena backed up in our discussion of her experiences.

“My friends were all most supportive, and that can be quite emotional”, she recounted. “When I returned to the sport, those who remembered me have accepted me in my new identity and treat me as normally as before. I have made new friends, some of whom are intrigued and interested in me being transgender and ask sensible questions which I am happy to answer. I have also met people with trans children and partners. No difficulties. Those who are not aware of my situation just accept me as Rowena. I don’t hide my transitioning, but I don’t push it either. If I’m asked, I’ll explain.”

It’s fantastic that people such as Rowena and I are now, for the most part, met with widespread support both within the sport we love and more broadly, despite the undoubted persistence of transphobia, and I have every hope that, with the support of allies as well as LGBTQ+ people, society will continue on its journey towards acceptance without exception.

During my discussion with Rowena, I found her to be a very kind and open lady and I admire her commitment and enthusiasm for motorsport. The challenges that she has faced and the things she has done are certainly impressive and I look up to her. Despite living a quieter life now, she will be competing and marshalling at more events this year and I wish her the best of luck. Thank you for your time, Rowena. It was a pleasure to speak to you.