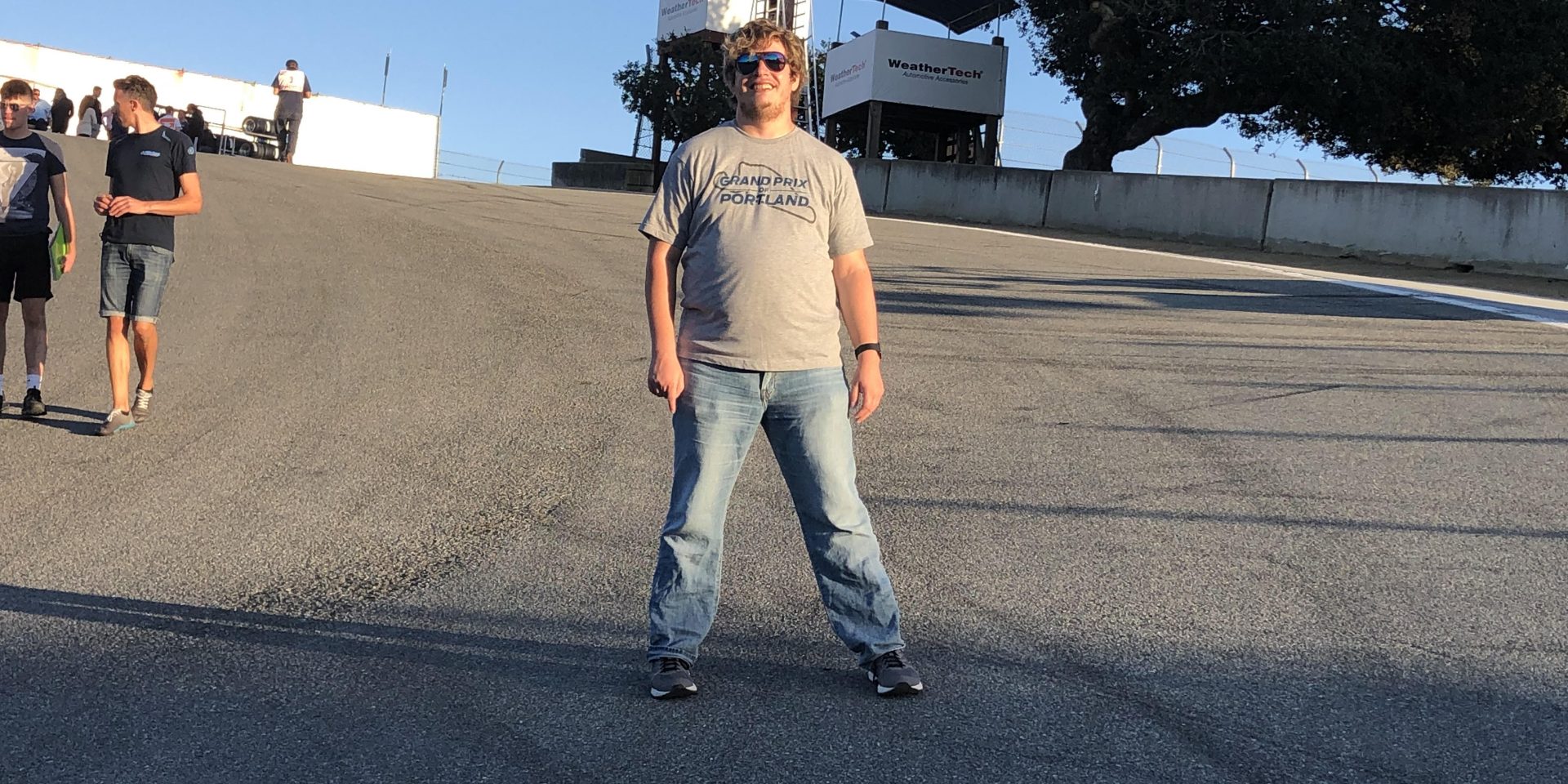 For this edition of Racing Pride’s Spotlight series we’re going international, looking into the experiences of the ‘Orange Army’ of volunteers without whom race days could not happen. Here, rising transgender motorsport journalist Caitlin Penny interviews American bisexual marshal Jameson Jones about coming to terms with his sexuality while working at major events such as the Rolex 24 at Daytona, the Liqui-Moly Bathurst 12-Hour, and the United States Grand Prix.

Jameson Jones is an enthusiastic American marshal who has volunteered at more major events than most of us could ever dream of attending. With ten years of motorsport experience, he has been everywhere from Canada and the USA to Australia. When I caught up with him for an interview, I was keen to find out which of these major events spark his passion the most.

“Street race/temporary road course events. These types of events require the utmost concentration by driver, team and marshal alike to avoid mistakes that may cause someone to have a bad day on the racetrack. I also love these events due to the proximity to major metropolitan areas as is the case with Long Beach and Toronto, with easy access to mass transportation as well as offering inexpensive accommodation options for those people on a budget. I get to be a tourist for a few days before the event so I can take in the ambiance of the area such as the restaurants and bars, attend other sporting events or visit well-known landmarks. It gives me more opportunities to look at future visits for other events or just to simply get away for a few days.”

Jameson clearly knows his stuff. So he should, he’s been around motorsport since 2002. His story is an excellent example of how the motorsport bug isn’t infectious, but can be inherent within oneself.

“I have been a motorsport fan ever since a young age. Whether it was F1, sports car, IndyCar/Champ Car, motorcycles, etc. I would find myself trying to watch as many as I could on television and read about them online. I would also use photos that I collected from magazines and the web for notebook covers in school.

My Dad took me to my very first race in 2002 at Virginia International Raceway, the VIR 500 for the Grand-Am Rolex Sports Car Series, and I remember interacting with the drivers during the autograph session and being able to spectate at different parts of the racetrack. In 2004, I wanted to get involved with motorsports; not as a driver, but as a participant in another form. I researched how to get involved and I reached out to my local SCCA region, North Carolina Region, in the summer before my freshman year of college. I told them that I wanted to get involved and they told me about Flagging & Communications (F&C) and said they would show me the ropes to the specialty. I was very hesitant in blue flagging then and only wanted to be on yellow flag for the entire weekend. At my second event out, the VIR 400, I was hooked on blue flagging for the slower GT and SGS cars. Over time, it only ignited the passion more and has led me to where I am today.”

Passion is always admirable. Even more so, in Jameson’s case, is his commitment. Keep in mind when you read what follows, that Jameson is a volunteer and thus does all of this preparation and work completely unpaid:

“When I returned to flag marshaling in 2017, it was very difficult at first to balance a work life and a motorsport life.

Back then, I worked for a company who didn’t understand the concept of a work/life balance, which is very important given the current employment climate we have in the United States with more jobs to be filled than people to fill them.

In 2019, it has gotten much better in being able to have a work life and work motorsport around it. I work for two amazing store managers at American Eagle Outfitters and Bath and Body Works who both understand my motorsport life as well as my desire to help them in my job roles when I am not at the racetrack.

I usually start and end my racing season during slow times of the retail year thanks to the Daytona 24 Hour being in late January and my last race tending to be either in late October or early November. I tend to not plan to work events during any peak business times unless it is a signature event on the motorsport calendar and with careful discussion with both of my store managers, especially if we are on the eve of floor sets or major sales events.”

Of course, marshalling, travelling and working aren’t the only aspects of Jameson’s life. In 2016, he came out as bisexual and started dating a man. Soon afterwards, he decided to end his long break and return trackside:
“One of the flag chiefs at the time was very welcoming and told me that I could bring my boyfriend to any of their events throughout the season”, explains Jameson.

“My coming out was also well received in my close racing circles with friends whom I knew for many years before I came out and were excited for me to come back to flagging. It has changed my life so much. I wanted to be a more open, honest and exploring person throughout my motorsport and personal life, and I got to be my true self for the first time in over 30 years; knowing I didn’t have to explain to anyone why I didn’t have a girlfriend or why I am choosing to date my current boyfriend of almost 3 years.

It lifted a huge weight off from my shoulders that I didn’t have to hide who I was or risk the fear of being outed for being bisexual both inside and outside of motorsport. There were times that I thought that coming out was a mistake and, at times, individuals had targeted me personally and professionally due to coming out, which left me anxious and depressed simultaneously which I thought would never end. However, I knew that many people who went through the coming out process in various stages of life dealt with similar feelings, so I wasn’t alone.
The only regret I had was I didn’t come out much sooner, such as during my high school or college years.”

Jameson is a fantastic example of the motivation coming out often gives to LGBTQ+ people. You often hear of people’s lives changing drastically after coming out, which is why it’s so important. For many, coming out is the biggest and best thing that will ever happen to them, so when others don’t accept or respect it that can feel very personal and negatively impact your mental health. What Jameson felt very closely resembles what racing legends Hurley Haywood (3x Le Mans winner) and Danny Watts (2x Le Mans class winner) went through and have since spoken about publicly.

We often think of bisexual people as having an easier time than trans or gay people, but this isn’t true a lot of the time. Bisexual people all over the world still face intolerant opposition, especially when they date or marry someone of the same sex. Knowing this, I asked Jameson to describe just what visibility means to him:

“Since late 2017, I have carried my bisexual pride and LGBT pride flags to every race weekend that I have worked at and have either displayed them during driver introduction laps (with IndyCar) or cool down laps to salute the drivers for a well-driven race.

For me, bisexual visibility within motorsport is very important now more than ever. I have lived in North Carolina for the majority of my life. The state has made multiple attempts to legislate discrimination against the LGBTQ+ community such as HB2 (also known as “The Bathroom Bill”) and same-sex marriage bans.

That is also very true not only in other states in the US, but at the federal and international levels as well. There are still many attempts around the world in the demonizing and criminalizing of LGBTQ+ people and their behaviors.

I am proud to be a bisexual and yet I have the same hopes and dreams as those who aren’t bisexual, such as equal treatment, marriage and to be able to start a family someday.”

Truer words could not be spoken from a man who knows what it’s like to struggle with sexuality, a man who has fought through tough times and a man who flies LGBTQ+ flags with pride.

Jameson Jones is particularly thankful to his parents who helped him regain his passion for motorsport and welcomed his boyfriend with open arms. Special credit also goes to IndyCar and IMSA and their staff, especially race directors Kyle Novak and Beaux Barfield along with race control staff Jim Swintal and JoAnne Jensen.

As we entered the closing stages of the interview he signed off with this message:

“To anyone who may be struggling with coming out or who wants to come out, don’t be afraid. Be courageous because you are taking the steps to live your true, authentic self. Be proud of who you are. People may tell you one way or the other that isn’t right, but please know that there are people both inside and outside of motorsport who will be by your side, some who may not be obvious until times can be great and tough as well. I am also an open door, so please feel free to contact me on Instagram at @SCCAflagger2017.”

Jones then is a genuine inspiration, a man who has been through tough times and come out the other side a more fulfilled person than he was before. He is true hero of the American marshaling world and we can’t wait to see where he goes next.