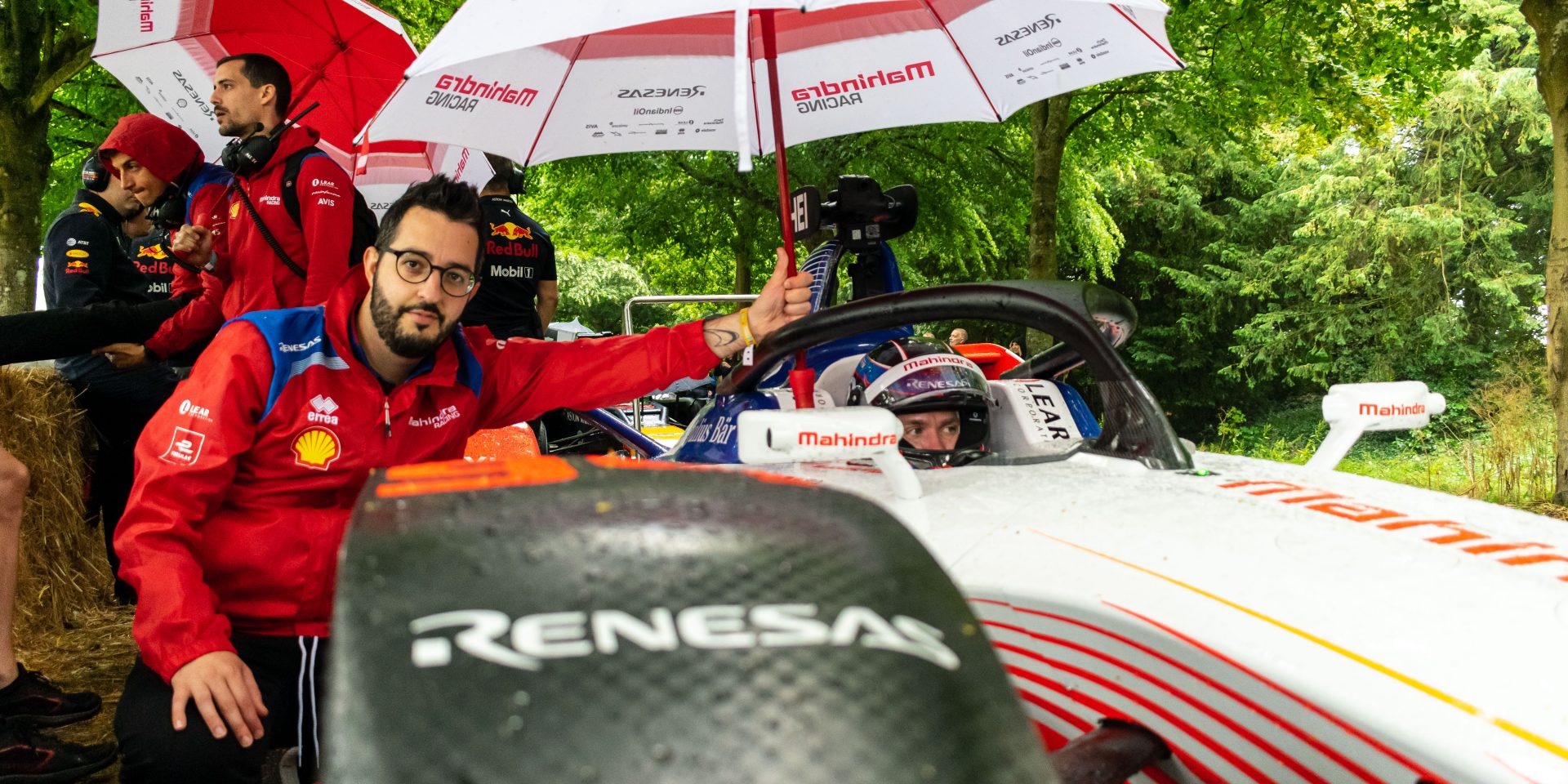 Let’s start with the recent past. You’ve been a part of Racing Pride since the beginning. You’ve designed the logo and website. Tell us about you got involved and the development of the logo from what I recall was a helmet with a lion’s mane.

I was approached early on by a mutual friend, Jon Holmes, and put in touch to help develop a brand identity following my work with Arsenal’s GayGooners, Proud Canaries and Sports Media LGBT+. I remember Richard and Christopher had an idea of what they wanted the Racing Pride logo to be and I really didn’t like the idea because I thought it was too obvious, wouldn’t stand out and wouldn’t look strong enough at smaller sizes.

We got through a few rounds of concepts and thankfully they gravitated to the design I felt was the best option for them. Then it was just the small matter of creating their website and launching.

So how did you become a designer in motorsport?

I’ve been a Formula One fan for a long time and when Formula E started, I wanted to follow it and loved it. I started designing various things like badges and t-shirts which some of the teams picked up on and asked me to send to them. I entered several of Mahindra Racing’s fan competitions (and became a finalist) so when I attended pre-season testing as a photographer, I made an effort to go and speak to their Team Principal, Dilbagh Gill. Over the next few months, I entered another of their competitions and was given some freelance work to design race posters for them. I then got a phone call from Dilbagh who said he was looking for an in-house designer and asked if I would be interested.

Design and motorsport have quite a lot in common in that what you did yesterday means nothing tomorrow. I am very competitive and always pushing myself to be better than I am because I know there are so many people who can do things that I can’t and that drives me nuts.

Whilst there aren’t really any accolades for me to personally win, I would love to be part of a title-winning team and know that my livery/team kit was a part of that moment in history! I have a race-winning livery, now I want a championship.

Tell me about your experiences of being LGBTQ+ in the motorsport paddock and what more needs to be done.

It’s hard to say as I don’t get to travel to races very often so I don’t spend time with the members in the paddock that much. I know of a few journalists who are LGBTQ+ and I’ve been told there is a mechanic in the series who is but I’ve never met them. It tends to be certain roles where you’ll find LGBTQ+ representation but it needs to be far wider than this.

Overall motorsport is still a very white, heterosexual, male dominated environment and you’re very aware of that when you work within it. I feel that Formula E is a very progressive, forward-thinking series and the people within it reflect that. There are times when people say some ‘banter’ or ignore you when you’re in a group which makes you feel isolated but I give as good as I get and will call it out if I think it’s unacceptable. Breaking people’s stereotypes of what they think a gay person is like and educating them is really important and on the whole I think people see me and treat me as Thierry, their colleague and not ‘the gay one’.

What do you say to people who criticise movements like Racing Pride?

When you are a young person who feels different (whether LGBTQ+, female, disabled etc) deciding on what you’d like to do as a career is tricky because, if no one seems to hire people like you to do the jobs you dream of then in the end the likelihood is you won’t pursue it. People should get a job because they are the best person for that role not because they can have ‘bants’ with the lads.

Finally, in terms of helping others, I’m always happy to give advice so if anyone wants to have a chat about design, motorsport or being LGBTQ+ then feel free to get in touch @designbytbc