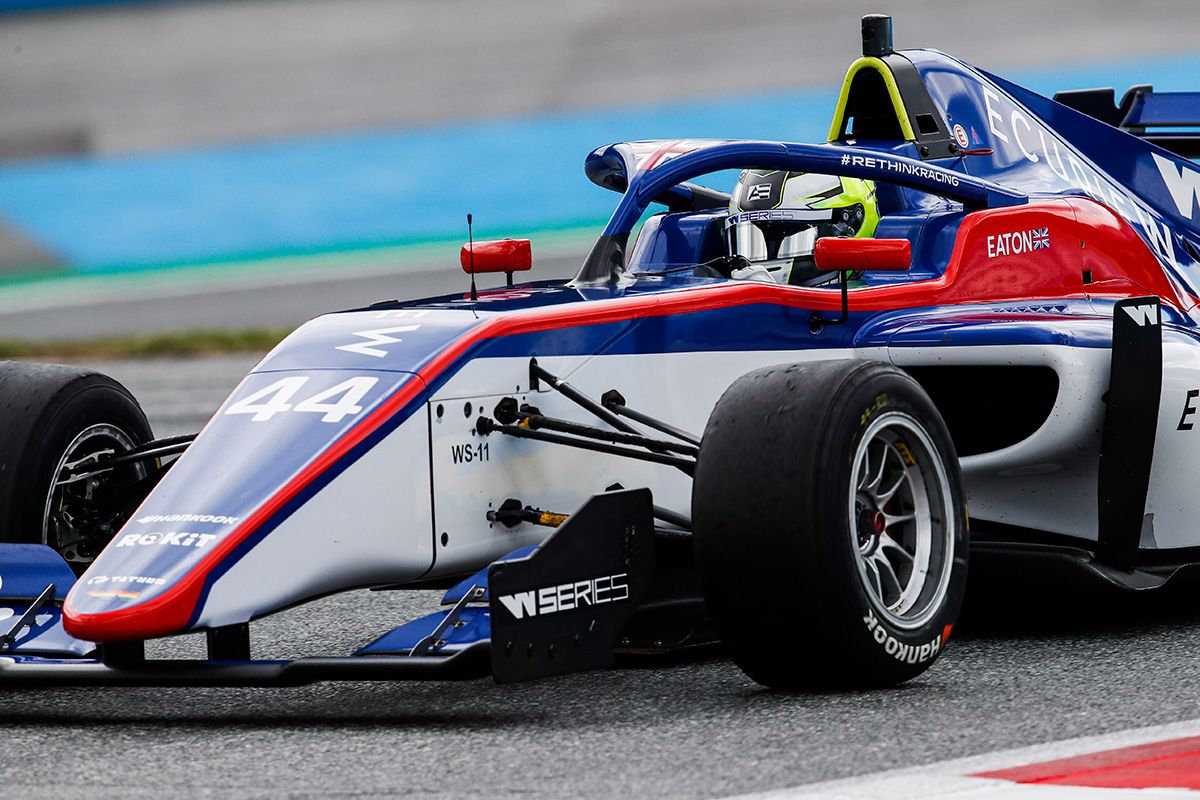 A few years ago, sitting on the couch while my father and stepmother were watching F1, I fell in love with motorsport. What started as an obsession with Formula 1 soon turned into an obsession with all different sides of motorsport. I was shocked by the lack of women in the sport though, and looking even further, the lack of any drivers that differed from the norm in any way. I thought this was the sport in which everyone competed against everyone. In 2019, W Series had its first season. In June of that year, Racing Pride was born. I am no driver by any means, I have only been karting once and I was horrible at it, but it felt great to see myself, a 22-year-old bisexual woman, be represented in the sport that I fell in love with. So when the opportunity arose to interview two W Series drivers who also happened to be Racing Pride ambassadors I had to say yes. Abbie Eaton and Sarah Moore are racing in my home country this weekend. Their blue and red cars will stand out in the sea of orange. They will be an inspiration to all girls and LGBTQ+ fans in the Zandvoort grandstands.

Covered in some nasty bruises on her arms from the qualifying crash in Spa, Sarah looks back on last weekend. ‘I think for most of us it’s probably the biggest crash of our career so far. It was a big one, but I’m okay.’

Spa didn’t end up with more points on the board for either Sarah or Abbie, but the first W Series race of 2021 brought some much better results. In Austria, Sarah Moore became the first LGBTQ+ driver to finish on the podium on a Grand Prix weekend.

‘That was extremely important. I think I was happier for everyone else than I was for myself.
For me, I’m a racing driver and I just go out there to get the trophies, to bring home the win. That’s the most important thing for me. But if I can represent the community with doing what I did, that is great. Seeing how much of a difference it has made to everyone was great. It’s massive for everyone I suppose.’

It was massive. Social media was flooded with positive reactions from both fans of W Series and people who discovered the series through this podium. They felt represented, and representation is so important. Just look at the queues for the W Series autograph sessions in 2019, full of little girls waiting to meet their idols. This also applies to LGBTQ+ fans. Abbie and Sarah have become the LGBTQ+ role models that they did not have when they were younger. Although Abbie said, ‘I’m quite strong-minded, so if I wanted to do something I don’t need a role model. I will just do it,’ she also acknowledges the importance of role models and representation. Her being a role model became clear through an interaction she had at a charity karting event.

‘A young girl came up to me and said, “I just want to say thank you for being you. I’ve really struggled with my journey. Seeing you being successful and being open with who you are inspired me to confront my situation.” She talked about coming out to her family and friends because she felt confident that there is going to be a positive way out. That was very cool. To have a stranger come up to me and share that with me.’

This story shows why Abbie joined Racing Pride. She said, ‘If me being part of Racing Pride, being a public figure and being authentic and happy as who I am and living as who I am, helps and inspires others, I’ll be happy to be a part of it. When that girl came up to me and told me her story, I thought, “It’s worth doing and it’s making a difference”.’

Abbie also talked about the advice she shared with that girl.

‘I wanted to make her know that it isn’t easy sometimes. You are you, and who you are and how you behave is down to you. Other people might not approve of you, they might try and put you down, they might do whatever, you have to stay true to you and who you are.’

W Series is supporting F1 this year, the biggest series within motorsport. A few years back, diversity was barely in F1’s vocabulary. A big push for diversity started in 2020, and while F1 teams had never really acknowledged Pride Month, or any LGBTQ+ related issues really, a big change happened this year. Social media statements by F1 teams, drivers speaking out against the Hungarian regime’s anti-LGBTQ+ laws, and the cherry on top was Aston Martin F1’s partnership with Racing Pride.

‘It is just nice to see F1 teams getting on board with it. As everyone knows, F1 is the biggest sport. To have support coming in at the biggest sport, hopefully it will have a knock-on effect in the lower series,’ Sarah said.

All three of us were very impressed by Sebastian Vettel’s helmet and loved Aston Martin’s rainbow halo.

‘You don’t have to go overboard and have rainbow flags everywhere, just little touches to say “We get it and we are trying to do things to help”,’ said Abbie. ‘I think Aston Martin were really tasteful in how they did it. You saw on their Instagram they got a lot of stick. Credit to Aston, they stuck with the guns. They were still pushing it and were still supportive. Good on them.’

She continued, ‘Organisations such as W Series and Racing Pride are all making a difference. Some might make more of a difference than others, but it’s all positive change. I think we’re all moving in the right direction.’

This weekend, F1 and W Series will race in the Netherlands. Abbie and Sarah will be able to show their skills around the Zandvoort circuit, and inspire fans in a new country. You would think that after last week, they won’t want to see any more rain for the rest of the year, but nothing could be further from the truth. ‘I do want another wet race for sure!’ said Abbie. They both see the importance of qualifying well this weekend. ‘It looks like such a difficult race to overtake, other than the first corner. I think it is going to be down to where you qualify,’ Sarah added.

After Zandvoort, there are two more races this year in which the drivers can try to score good points. The W Series paddock will travel across the ocean to finish its season in the USA and Mexico.

‘I have always said that I think I’m looking forward to America the most out of the new tracks, both the place and the track. I have always wanted to go to America, it’s one place I’ve never been to,’ said Sarah.

But before that, we will see them in Zandvoort. I will be sitting in the grandstands this weekend. Among the fans donned in orange, being there to cheer on their hero Max Verstappen, I will cheer for Abbie and Sarah. For me, they are heroes. They are part of the push to make this sport more inclusive. They’re representation. They’re inspiration.