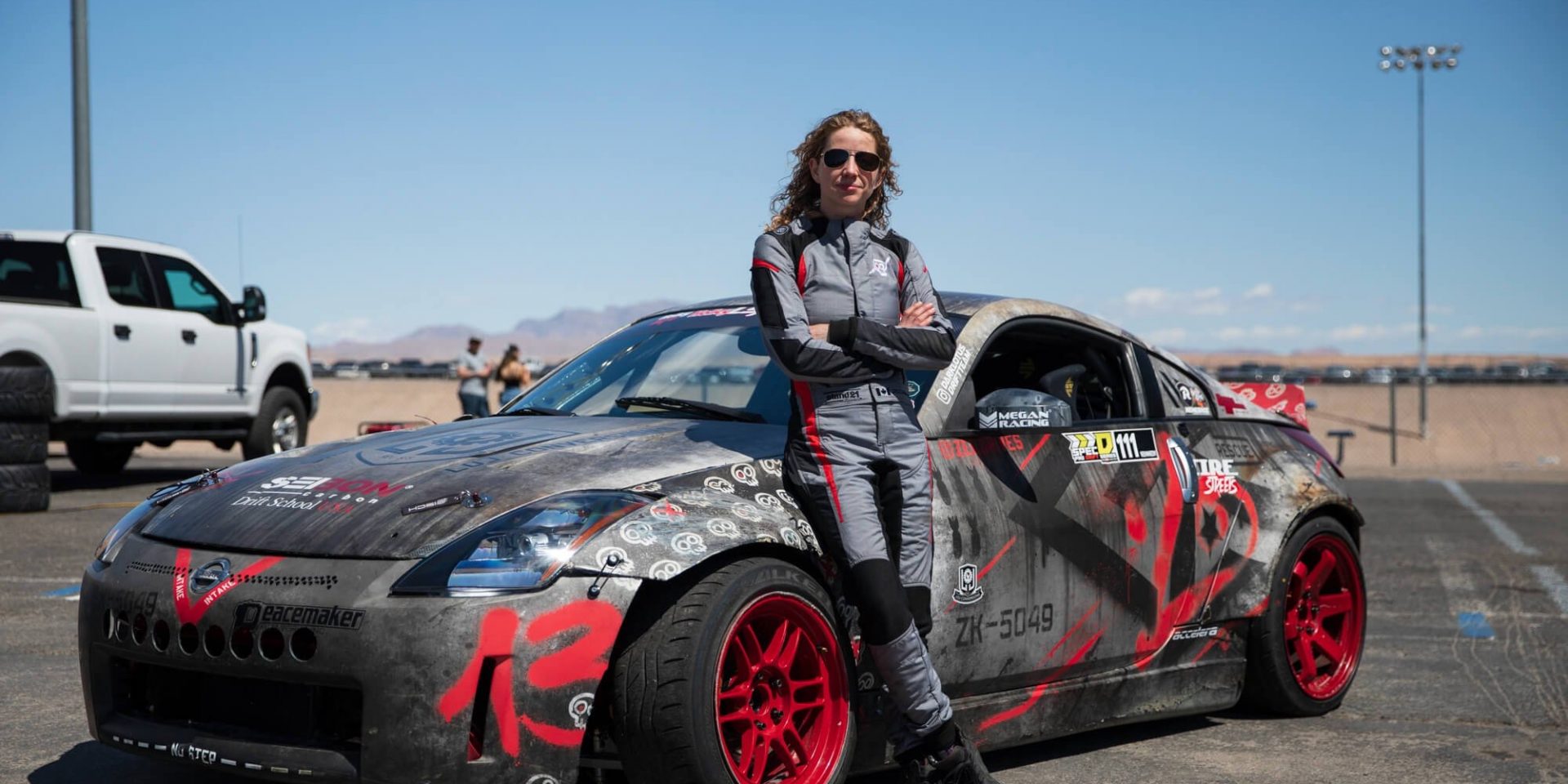 Hello and welcome to the latest Racing Pride Spotlight article. Recently, Castor Chan sat down with Canadian stuntwoman and drift racer Zandara Kennedy to talk about her life, stunt roles, and being a Racing Pride Ambassador in North America.

Having trained in trampoline and circus, Zandara’s first dream was to be in Cirque du Soleil. But after getting her driving and motorcycle license she saw a path forward in stunt performing, with a special interest in vehicle stunts, which led to roles in movies such as X-Men: Days of Future Past (2014), Doomsday (2008) and RoboCop (2014).

“When I researched other high-level stuntwomen and looked at their resumes, most of them had taken a course in stunt driving. I did my first stunt driving course I was 19 and I just loved it. When I was in a car, I felt like I intuitively understood it and we were at one, so I came back from it and bought a car, then practiced anytime I could. Even though my background was in acrobatics, driving ended up being a thing I was known for because I had so much passion and put so much effort into it.”

Although Zandara loves driving all types of stunts, she has an affinity for stunts involving fire.

“I have a high degree of trust in the people that I work with, so we develop these really strong, tight knit relationships. Fire stunts are something that I specialize in, and I’m close to a lot of fellow stuntmen and women who also specialize in it. I think understanding what is happening is primarily what keeps you safe, as fire stunts are a great example where if it goes wrong, it can go horribly wrong. Thanks to my team they rarely do though, because of the planning and techniques that we use, so I rarely feel scared. One of my other favorite things are car chases. It’s a ton of setup, and a ton of excitement. There are always enemy cars, but I know the people driving, and I know that they’re not going to obstruct my path. Sometimes when we review the footage, we’re inches away from contact. That’s the goal, right? To have that much trust working at a high level and for me, that’s the most fulfilling thing in my line of work.”

Zandara was the stunt coordinator for the CW’s Nancy Drew, a show that received praise online for its portrayal of diversity. She explains how dear this show is to her.

“Nancy Drew is a project that is so dear to my heart, it is run by a group of producers who really feel strongly about diversity. It’s obvious that they are not doing it just to stay relevant, as they really represent all sorts of identities on set. It’s such a great environment, they always tell the crew every season that our safety and emotional well-being are most important. The producers are always writing storylines where differences don’t make someone but are instead shown as a part of them. It’s such a great show to be a part of, and it’s given me so many opportunities to bring my creative ideas to the table too.” 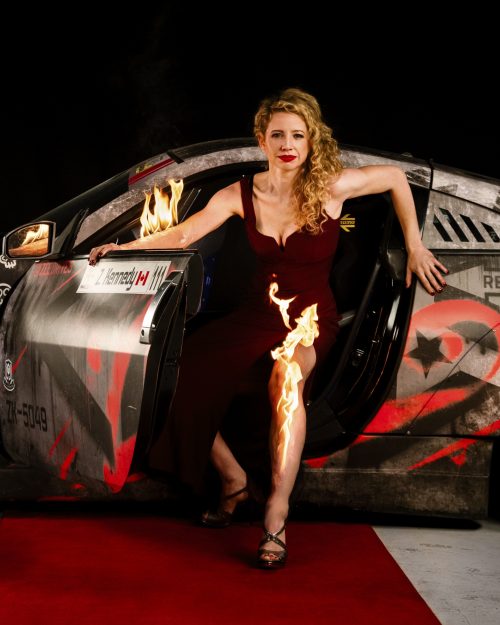 Zandara has now spent two decades in stunt driving. As she explains, it’s not an easy career to get into.

“The number one question I get from people is ‘how do I become a stunt driver.’ It’s so difficult to answer because it is such a hard career to make. The common advice I give to people is ‘you must get hit by a car before you hit someone with a car.’ Especially with vehicle stunts, the risk of damage and injury is high. It’s a great position of trust to be put in and it’s rare that a stunt coordinator will want to hire someone new. In my case, I was doing physical stunts training in my free time. After several years, a coordinator came out and saw what I was doing first-hand, and they gave me an opportunity, which set the ball in motion, but it took a lot of effort to get there.”

In recent years, Zandara has moved into the world of drift racing and holds a pro drift license. Her goal is to compete in Formula Drift. She became a Racing Pride ambassador in January 2022 and this season she has been competing in a number of drift series and events all across North America, including Klutch Kickers and GRIDLIFE.

Zandara’s specialties of drifting and stunts are in often male-dominated fields, and this made paving her way forward with her queer identity even more challenging.

“It’s difficult, we have ideas of how we might be received based on other people’s experiences or the language that we’re hearing. When I first started pursuing stunts, I was extremely private. However, I realized that there is a very tight-knit bond in the film industry, and you need to know people and to trust them. People could tell that I wasn’t entirely there, and I was holding back a big piece of myself. It felt like a major risk at the time when I started letting people know that I was queer. It is a different path; you can feel as though you aren’t like the people around you and there is an adjustment. But even though it did shift the way I interacted with the guys, I didn’t feel that anyone rejected me, which I was glad about.” 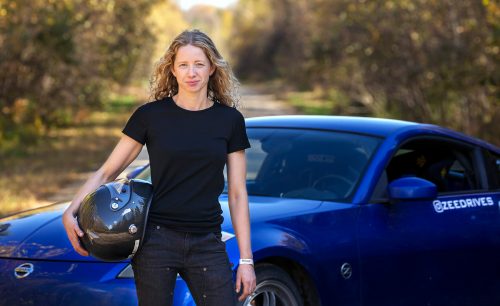 Becoming a Racing Pride North America Ambassador has been an exciting new venture for Zandara. She told us what Racing Pride’s expansion means to her and gave her insight into why it’s both important and challenging to spread the message on a global basis.

“I’m excited and it’s cool to see the other ambassadors and the progress that they are making! It’s been interesting to watch it take hold and see how Racing Pride has spread in the mainstream European audience. Unfortunately, North America is not like Europe – I really wanted to work with Racing Pride but I was also really apprehensive. My racing is largely in red states where people are very passionate about cars, and the demographic is people who tend to be stereotyped as not particularly friendly to any kind of pro-diversity movement, but I think that the bigger issue is that a lot of people don’t understand why it’s important. That’s almost harder because they’re not against it, they just don’t see what the big deal is. It’s so hard to share with someone how you feel that you don’t belong somewhere if they’ve always felt that they’ve belonged in every space they walk into.”

Ultimately, Zandara gives crucial and empowering representation for women and LGBTQ+ people in spaces where that has often been lacking. We wish her the greatest success as she continues to carve out an extraordinary and inspirational career.

Racing Pride wants to thank Zandara Kennedy for taking the time to do this interview, and Castor Chan for interviewing and authoring this article. If you want to keep up to date with Zandara’s career, travels, and life, you can follow her at @zeedrives on Instagram or check out her website www.zeedrives.com.