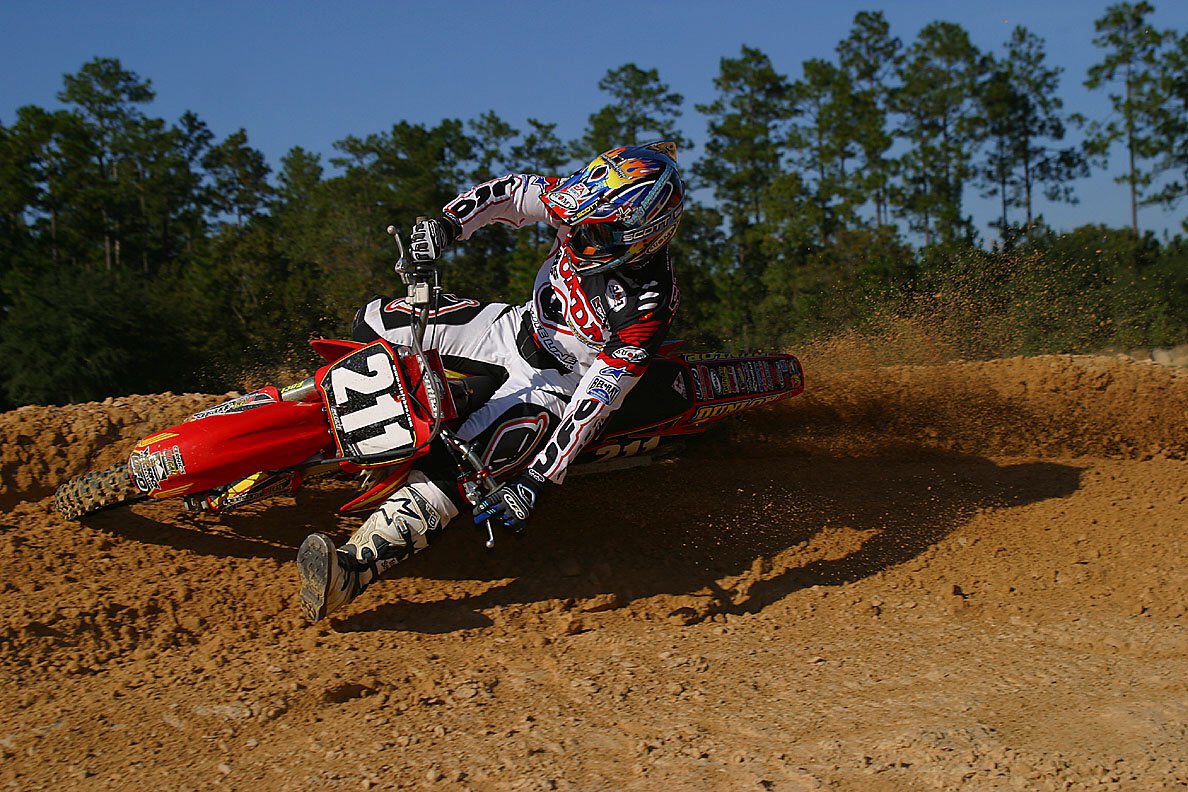 With her seven Italian Championships, three US national titles, and three Women’s World Championship titles, motocross rider Stefy Bau is one of the fastest female riders the sport has known. After her racing career she used her experiences as a woman in a male-dominated sport to help other women and girls find their place in that world. In 2019, Stefy co-founded Init esports, an esports agency with a focus on diversity and inclusion.

When asked about her racing highlights, Stefy answers, ‘One of the best things that has happened to me in my career is the fact that I achieved what I set out to do, meaning that when I was a little girl, I looked my mom and dad in their eyes and said, “One day I will become a professional Motor Supercross rider in the United States and be the best female motocross rider in the history of the sport.” I ended up doing that. I was incredibly proud.’

In 2005, Stefy became the first woman to compete against the men in the Motocross World Championship. She had always dreamt of this, but she could have achieved this years before she actually did, if it wasn’t for the Italian Federation’s interference when she was 18 years old. A trial in which the top five fastest drivers would be granted an entry to the World Championship resulted in a third place. Stefy was over the moon.

‘Then a couple of days later I received a phone call from the Italian Federation and they told me, “We decided not to send you because you are a woman.” At that point, because I’m a very self-driven person, I said, “Okay, I’ll do it my own way.”’

And so she did. Stefy packed her bags and moved to the United States. With a small English dictionary as her only companion she was ready to make a name for herself on the other side of the ocean. She immediately started winning races, got herself a pro-license, and ultimately that entry into the World Championship.

‘In 2005 I got a phone call from the FIM World Championship. They asked me, “Now we would like for you to come and become the first woman to race against the men.” I thought, “Wow this is so cool”, but it’s sad in some way because I had to leave Europe and my country to prove myself in America before being considered serious enough to [enter the World Championship],’ Stefy said.

Stefy’s story is one about never giving up, and about confidence. ‘I am a person that puts myself in that spot, meaning that I talked with many people and I always lead my life convinced that whatever I was doing, I belonged there. I was a woman racing in a male-dominated sport. For me it was totally normal, no different whatsoever. So by leading in that way I got many opportunities because nobody ever questioned it. I refused to be put in the box where society puts you in too often. I just say, “this is me”.’

She continues, ‘I really didn’t have any big issues to be who I am, also as a lesbian. Nobody ever questioned it. I think a lot of it is self-motivation but also confidence, to be able to really be authentic to who you are. I have this energy inside me of: “I’m Stefy, you either like me or you don’t. But if you don’t like it, it’s not my problem.” So I lived life like that.’

Stefy stresses the importance of role models and sees social media as a way to create them.

‘Having a lot of possibilities with social media and being truly more connected, I feel that we live in the era right now where it’s a little bit easier to be able to have your voice heard,’ she says. ‘So right now I do feel that every girl that is participating in motocross or motorsport as a whole has a very good opportunity to be a role model, much more because of the opportunity to connect in the world. So if you are somebody from the LGBTQ+ community, it’s incredibly important to use this technology, to be out there and tell your story, because I feel that the more there are role models out there, the more other people are going to feel inspired.’ 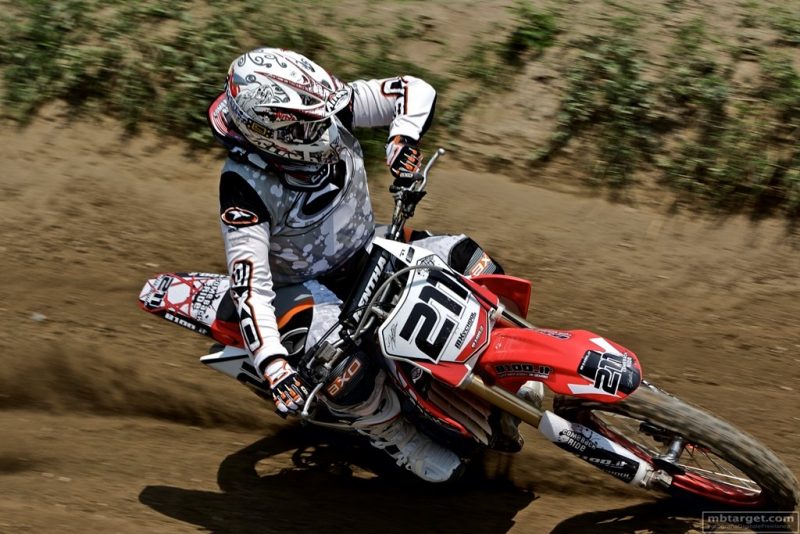 In 2005, a big injury ended Stefy’s racing career. Having to end the career she loved so much left her in a dark place but her confidence and positivity picked her up again and her role as a mentor for women in racing began. Stefy also worked for the FIM Women’s Commission and became the general manager of the Women’s World Championship, the championship that she won three times.

‘That was super cool because now I was almost like a mama to all the girls. Before, we were fighting on track, and now I was on the other side of the fence, protecting them, and that was super cool because I was able to change the mentality for every single girl. They didn’t see me as competition anymore. They were more willing to listen. That is when the women’s champions started to grow exponentially, because they knew that I was there to back them up no matter what.’

Stefy also became the CEO of an electric bicycle company. The confidence she has inside her transferred from racing to her new role.

‘I, again, had a seat at the table with the leader of the industry as the only woman there. I just feel comfortable to be there. To me it goes back to the fact that there is no difference. I just hope that there are going to be more women in leadership. Therefore they can be more inspirational to the up and coming.’

After her years as a CEO, a visit to her niece set Stefy on the path to esports. Her niece was watching others play video games, and this new way of enjoying games intrigued Stefy. F1 was already running a big esports championship, but there was no such thing for two-wheel racing yet. So Init esports was born, an ‘Esports Agency focused on sim racing and the development of diverse and inclusive participation in esports and motorsports’. For Stefy, the lower costs of esports compared to real life racing could bring more diversity into the latter.

‘My goal is to level this industry to bring in so much diversity, people from all over the world, and then guide them to become fans and consumers of motorsport. That’s the final goal. If you play a video game, it would be cool to one day get you into a real car or on a real motorcycle. And we all know that once we do that, there is no turning back.’

About the current state of diversity in esports Stefy says, ‘It’s a very interesting topic, especially if you really dive into the sim part of esports. Unfortunately, I have noticed that there is a toxic environment from the pro-community in sim racing.’

She continues, ‘So you need to have role models there, that don’t take that, and say, “well if you’re fooling me around, it’s just you that looks stupid. It’s not my problem, it’s yours.” Therefore, if we get more women to stand up, we’re going to hopefully see a big shift coming soon. I think we need to see that happen with way more role models in sim racing and once we have that, then the trajectory to get diversity in real life motorsport is going to be much quicker.’

To connect to those role models Stefy is creating a community through new audio chat app Clubhouse, in a room called Racing For Everyone.

‘The idea is to really have a safe space where everybody can talk and explain their opinions, desires, ideas, and brainstorm. I think that’s a very important place to start because if we can get drivers or sim racing professional athletes, male and female, [in the room] they can be really welcoming. In my opinion, that is the right way to create a community and therefore create more role models.’

‘If girls or young athletes can see [female drivers] and talk to them, the gap becomes much smaller. So they start to believe that they can do it too.’

Change is coming, Stefy says. She praises the efforts of Lewis Hamilton in pushing F1 towards more diversity, and also mentions the potential of young people.

‘The most important thing is to create a sense of normality. We are all human beings. We get up in the morning. We put pants on all the same. So there should never be any differences. I feel that right now young people can be the leaders of really making sure that everybody is normal, everybody is the same, no matter your sexual orientation, the country that you’re from or your race. We’re just human beings. I think that that kind of mentality is very cool to see in the younger generation, and it’s going to really make a big difference.’

As for advice for these young people, ones who might deviate from the typical image of a person working in motorsport, Stefy says to not be shy to reach out to others.

‘I’m here to help women succeed. Women that have my same passion or not the same passion but they want to know how they can grow. I’ll share my experience. I think if you really create a community of like-minded people and we create that kind of pillow, that if you fail we are here for you, then we can change things much quicker. And I really try hard to make that community and everyone is welcome to participate.’

‘I think that the biggest take away that I want to give to everybody is really try not to put yourself in a box, like society puts you in a box. You’re this or you’re that. Don’t listen. Be yourself. If you really drive with that, you’re going to find peers that are just like you, that are in the same profession as you and then you can continue to grow as an individual and go for what you love. Life is too short to just stay in that box and to just make other people happy. So just refuse the box. Jump out.’